Today, Thursday 16th May 2019, was somewhat epic when you think about it. Apart from one flat-earther, who didn’t have the courage of his convictions when it came to the vote, everyone who spoke at the Shropshire Council meeting favoured declaring an emergency, and then everyone voted for it. In a council with an overwhelming Tory majority.

How did we get here?

Votes of thanks have to go to Extinction Rebellion, both nationally and locally, for shifting the debate. Greta, too, is owed a huge thank you. So is David Attenborough (Richard? not so much: someone will need to let one of the LibDems know the difference). The scientists who finally got a hearing at the IPCC also need to be thanked, even if their timetable is hugely risky. The technologists who have developed the means for the world to get to Carbon Zero have to be thanked too: let’s be honest; so long as it felt impossible, it was very hard to stare reality in the face. 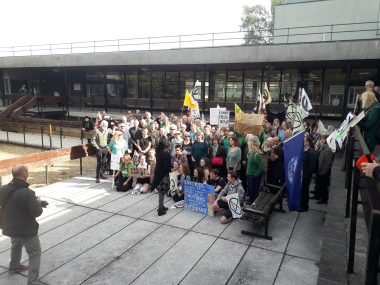 Then we have to thank those who have doggedly fought on this issue for years. Because this movement has not sprung up from nowhere; it’s been gestating and developing its arguments for years. And here I must pay tribute to the political party that I only joined about 4 years ago, and even then, mainly because of their ‘Social Justice’ agenda – the Green Party. For years they have been saying this is an emergency, but they – we – have also been saying; look, saving the planet (by which we really mean humanity) is both necessary, and good for us; it actually addresses fuel poverty, social isolation, mental health, inequality….

Firstly, Extinction Rebellion did ourselves proud. The numbers, the banners, the mood, the singing… Adam’s radio spot and speech to the Council… even persuading those of us (me included) who were sceptical about following up December’s climate change motion so soon.

Secondly, we had a mishmash of motions, partly the result of somewhat inept email exchanges between various councillors and myself that – between you and me –  did not reflect well on claims that this all needs to be ‘above party politics’.

Motion number 1 from the Labour Party called for carbon zero by 2030. But people who are late to the party don’t always know the songs, so it took the Green Councillor (ok… me) to jump in and explain why being ahead of the IPCC 2050 deadline matters. (Briefly: that deadline is itself too weak; it’s for the whole world, and many poorer regions legitimately complain that they will struggle more than the wealthy countries who pumped out most of the CO2 since the industrial revolution; so wealthy countries need to get ahead of the curve; the public sector needs to lead in the wealthy countries; right now in the UK local government needs to lead the public sector, both because – it turns out – it is a fairly vibrant form of democracy and so can be influenced quickly, and because the government is… distracted.) But Motion 1 was defeated by the Tories because they are keen to be realistic and don’t want to disrupt their growth agenda. Actually several Tories supported it.

Then came the Tory motion, as amended by the LibDems, which didn’t have a target date but did move us forward on some accountability issues, and did declare an emergency. I put an amendment to this. Again I really have no choice but to blow the trumpet of my party: we have done our homework – see our ‘Shropshire Green New Deal 1.0.’ 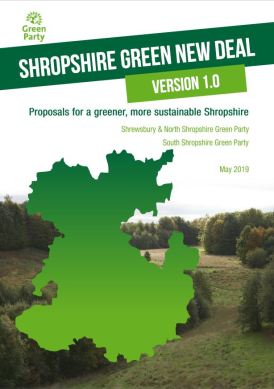 So I could propose some specifics on what needs to be done between now and December, and then on to this time next year,  especially on planning policy. Don’t yawn – this is important: if we continue to build homes and workplaces that spew greenhouse gases either we are not going to get to carbon zero, or we are going to look very silly retrofitting nearly-new buildings. Those who were paying attention could see the sense of this. The administration said, ‘hold your horses; this sort of detail needs careful consideration’. They won the day, but only just, with several Tories again breaking ranks to vote for my amendment alongside everyone else. Once that was out of the way there was a fag end of a discussion on the main motion, which was duly passed unanimously.

But does this really mean anything?

Yes, I think it does. The shifts from denial to grudging acceptance and from acceptance to urgency are really happening – at different rates amongst different groups of people. The shift to action is being developed – not least by some dedicated council workers in Shropshire. I have been told that for years, and right up until last December, you had to whisper ‘climate change’ if you didn’t want to be regarded as a bit weird. That has changed, and some staff are really on it. Then there are enough councillors who get it, across all parties, for this to shift the mood on some of the committees. There is now a steep learning curve to be climbed, whereby councillors can start talking confidently about heat exchange and AECG building standards and waste management. But the sands have shifted and are continuing to shift. And those leading the way are not always the people you’d expect.

But what about the North West ‘Relief’ Road?

At the same time, there are enormous blind spots all over the place. The biggest by far is the continued support by both Labour and the Tories – but no longer the LibDems – for the North West Relief Road. This will create major disruption to ecology, require huge amounts of CO2 spewing concrete production and present a colossal financial risk. The case for it entirely relies on the disastrous continuation of car-dominant private transport. Yes, cars will be electric eventually, and will still be a vital part of the mix, but they will still clog up streets and burn up energy needed elsewhere, and car-is-king policies mean they will hog the space and resources needed by walkers, cyclists and public transport users, making the ‘modal shift’ to other forms of transport so much harder.

There are plenty of other harmful policies still being pursued: cuts to bus services; the unnecessary extent of new homes building on the edges of towns, hungry for yet more infrastructure; cuts to the ‘rights of way’ team who could be leading on developing walking routes…

So what’s the ‘balance sheet’?

2019 needs to be remembered as the year Shropshire (and everywhere else) turned the corner. We can’t say that yet. But there are people across the campaigns, in council offices and on the council itself who are, to varying degrees, trying to make this happen. Between us there will continue to be disagreements and frictions, but with enough good will and effort it’s just possible that we will look back and be proud; not just of the effort but of the achievements.

I have been a member of the Green Party since 2015. I am an elected Councillor in Shropshire. I do other stuff too - obviously - but this blog, at least for now, is going to be for thoughts and rants related to my Green Party membership which require a bit more than a facebook post. View all posts by Julian Dean

1 thought on “Shropshire Council has just voted to declare a Climate Emergency. The devil will be in the detail.”